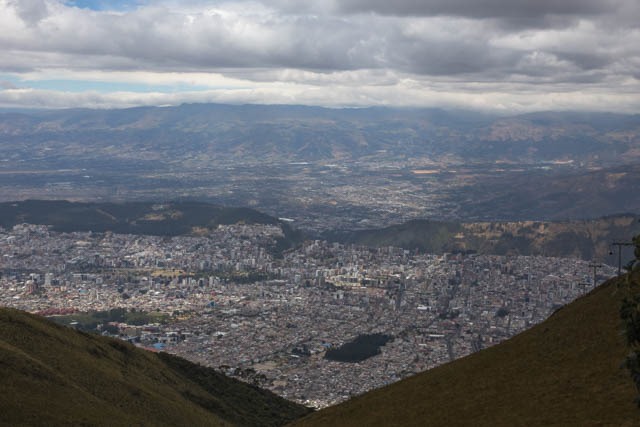 This morning we were feeling a bit drained from 3 days being tossed around a 4WD and we had a big journey ahead so we slept in, found the 24h House channel and generally chilled. In the afternoon we said good-bye to Quito and started our 24hr journey to San Pedro de Atacama. We started with a 1hr drive to the airport, then flight 6,7 and 8 of our trip. Quito to Lima, a 1hr or so wait in Lima then Lima to Santiago where we had 6hr wait. We found the domestic lounge and made use of their comfy seats and I fell asleep. Then Santiago to Calama. There’s literally nothing in this town other than the airport and a giant minesite. So then a 1hr shuttle bus to San Pedro. Looks like a few renewable projects going on also as we passed a big solar farm and then a bunch of wind turbines. Checked into our hotel and found a place to hire some bikes and booked a Sunday tour. Not too shabby on hardly any sleep. 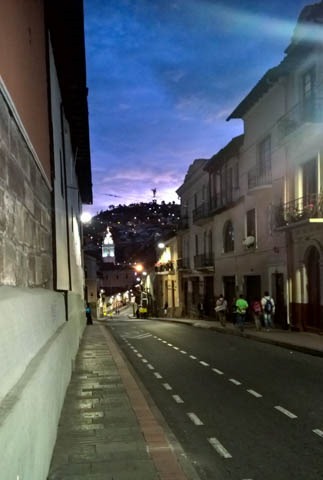 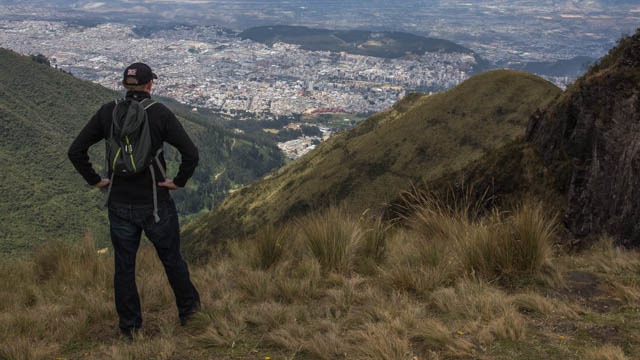 We went in search of high places in Quito. It’s not hard when you’re already at 2800m but we wanted a good look at the city.

We’re near old town which has a lot of old buildings and most of them are churches. We’re not big into churches so I limit us to one – The Basilica del Voto Nacional. Why did I pick this one? Because you can climb the tower for a view of Old Town.

It costs $2 to go up. At level 3 there’s a big balcony with a decent view. Then you walk across the wooden bridge which sits on top of the indside of the roof. It’s pretty wobbly with small rope handles and then up a steep ladder/stairs. On this level you see the two towers and a bit of the city. Then you climb up the tower. Really narrow treds and steep ladder/stairs to a pretty awesome view.Definitely worth $2. Hang here for a bit and then head down. Halfway down we run into one of the families from the boat who lost their luggage. Glad to hear they got it back finally! Next we catch a cab to the base of the Teleferiqo – the cable car up the mountain. If you’re into down hilling you can take your bike up and down all day for an extra 8.50! It’s a decent ascent up the hill. There’s a pretty decent view up here and you get a feel for how massive the place is. You can see the big skyscrapers of New Town which have a very different feel to where we’re staying in Old Town – think we picked the right spot. We wander up the hill a bit more for a better view and hit 4000m. You can keep going up the mountain for about 5k but we don’t have much water or the enthusiasm for a hike like that at altitude today.

Head back down and check out the small amusement park before we jump in a cab back to our hotel. 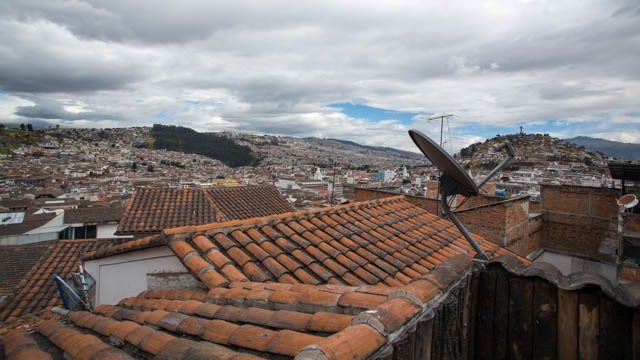 This morning had a fairly early start with a 6am taxi, a ferry to Baltra, a bus to the airport and a flight to Quito.

Annoyingly you “have” to be at the airport 90 mins before the flight even though it’s basically an upgraded shed.

Final thoughts on the Galapagos….

– It’s quite expensive to be there e.g. $17 US for a small tube of sunscreen.

– It’s a lot more impacted by humans than I expected. There’s a lot of cats and dogs running around and a lot of farmland.

– Land based vs boat based. We spent a few days on San Cristobal and Santa Cruz + a 8 day boat. In hindsight what I should have done was the 3 populated islands with day trips ourselves and looked for a cruise for outer islands (if one exists). It would have been a lot cheaper.

– Hiking distance has no relation to time. A lot of the ‘hikes’ that are 1-2hrs are actually only 500m or so. You’re very limited in where you can actually walk.

– Snorkeling was great – not sure if you’d see much more diving?

Then we had a 2 hour flight to Quito, then about an hour in the cab to find the owner of the apartment we’re staying in.

The view from our apartment is amazing. We’re just outside of old town. Went for a wander to get lunch. Managed to find the 2 spanish ladies from out boat at one of the restaurants…they’re going to think we’re staking them after finding them at the beach in Santa Cruz. Then a few supplies for the fridge and then I had a cracking headache from the altitude change so chilled for the evening.