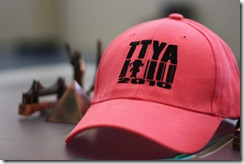 Yesterday was Brisbane’s annual Technology Takes You Anywhere (TTYA) event at Brisbane North Institute of Tafe. The event brought together 500 schools girls aged between 8 and 15 to participate in workshops, lectures and hands on activities. The event is aimed at increasing girls’ interest in technology and their confidence with using it. 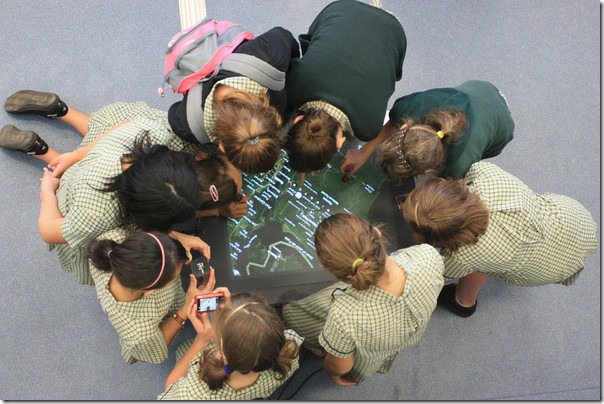 Soul Solutions, in our third year of supporting the event, provided an opportunity for the girls to experience a Natural User Interface (NUI) via a Microsoft Surface table. Building on our successful geography games from previous years we created a new Surface game to locate famous landmarks around the world. Some of the girls attending for their third year in a row recalled our previous efforts navigating the globe on a projector with an xbox controller or flying around by shifting their weight on a wii fit controller. 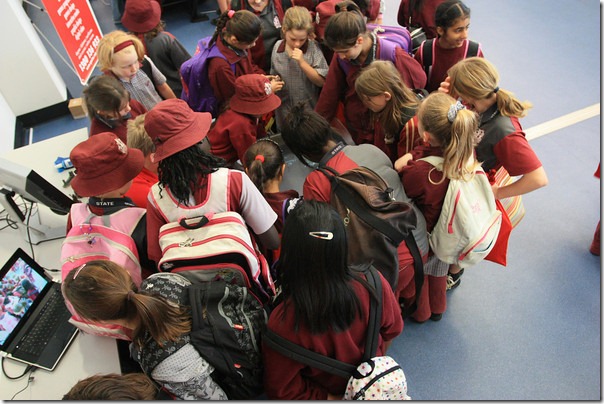 It was very interesting to observe the girls reactions to the Surface and to the game. The schedule had us with a new school of 25 girls every 10 minutes. The incredible interest in seeing what was going on had us initially overrun for a single table, we quickly setup an AR app on what was suppose to be our overhead camera to split the group up – you can read about that a bit later. 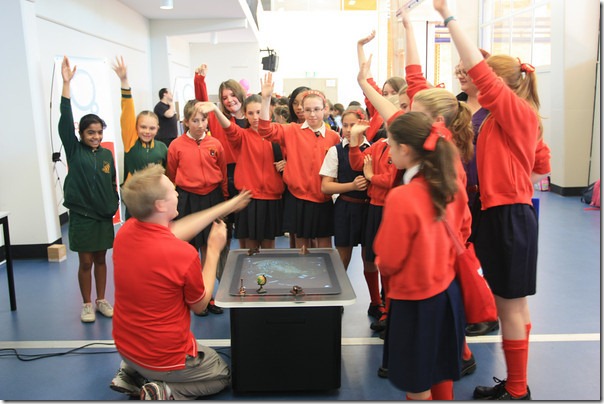 Once given permission to touch (they were all very well behaved) the girls understood the concept of multitouch and gestures with ease. Touch and drag to pan the map, pinch zoom and two finger rotate were the controls. 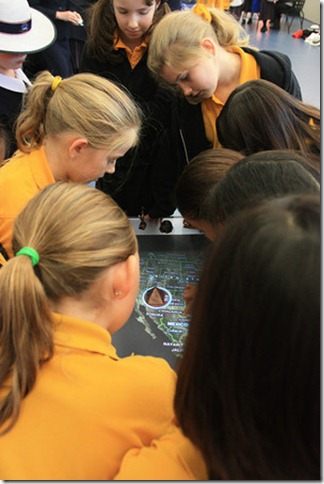 The most common question was comparing the surface to the Apple iPhone – “Is this like a big iPhone?”. Of course the Surface is multitouch just like the iPhone and we use gestures to control it but unlike the iPhone this table has a camera that can see everything on its surface. We go onto explain this not only allows a great number of fingers to be seen but also allows us to place real objects on the table to interact with the software. While the iPhone is a single user device the Surface promotes many users interacting together.

The game itself is a simple find the location as a fast as you can geography challenge. It is effective with a large group as the girls can combine their knowledge and help each other to find the location, sometimes even the teacher lends a hand. In this Surface version the locations are famous landmarks represented by real life replica pencil sharpeners. Locations included:

To win the game you zoom into the location as close as you can, around the physical object a circle appears with your time and indicates red if your not even in view or green when it is. However the girls thought there was a more intuitive way to win, most if not all picked up the physical object and placed it on top of the virtual one. We had learnt something valuable today also, usability testing is invaluable.

The different age of the groups proved to be a factor in finding locations, not because they had learnt this at school but because often one of the older girls had actually travelled or lived near the landmark. 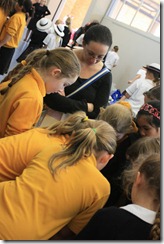 The teachers firstly struggled to get close to the device due to the overwhelming enthusiasm of the students. As the games progressed to harder landmarks however the teachers were drawn in to provide assistance.

Talking to one teacher about the use of technology in the classroom they commented “we’re not the centre of attention at the front of the classroom anymore” and believed that this new digital native needs more engaging formats of media. Maybe one day soon we will see Surface like technology replacing students desks?

To reduce the number of students around the Surface we quickly repurposed our HD webcam and displays to show some simple Augmented Reality (AR). We had setup the camera thinking it would be useful for others to see what was happening on the Surface from above but it became clear very early on it wasn’t going to work with the large group.

The web cam was incredibly popular, the application would render a hat, mask or funny morphed expressed on a detected person’s face. We did try our best to explain a little about AR and HLSL but the girls where having a little too much fun taking photos of themselves. 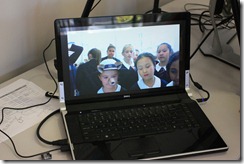 The event was once again very successful and the girls enjoyed themselves, learnt about careers in technology and experienced something new. We thoroughly enjoyed ourselves and even learnt something new from the students.

Finally we’d like to give a big thankyou to Microsoft Australia for providing the Surface table for the event, specifically thanks to GP, Christian, Jorke, Andrew and Celeste.

If you’d like to know more about the Surface application itself stay tuned for our next post or go visit the Brisbane office where we have donated the application complete with set of landmarks.