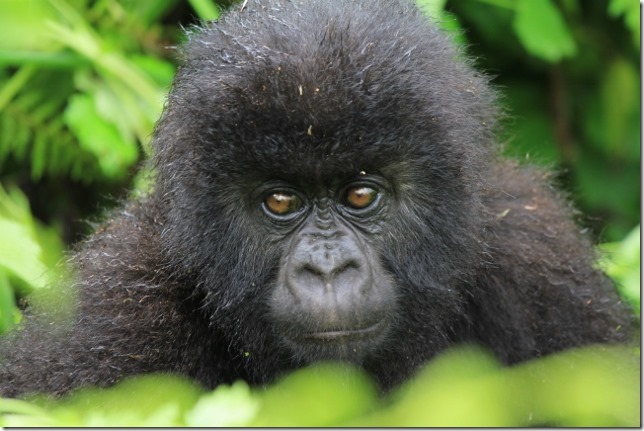 Woke up many times through the night in anticipation of this morning. Ever since I first saw these guys on TV I’ve wanted to go see them in the wild. The scrooge in me has put it off for years and this year I finally decided I’d better do it before it’s too late.

Up in the dark, I wander into the bathroom where the hot water heater is bubbling away, I turn on the tap, ping..light go out, but at least the water is hot, so hot in fact it’s boiling and I have to use the washer to turn off the tap the tap has become so hot.

We wait for our driver and strike up a conversation with another guy waiting to be picked up to see the gorillas. Our driver arrives and off we go to the park headquarters for a 7am start. 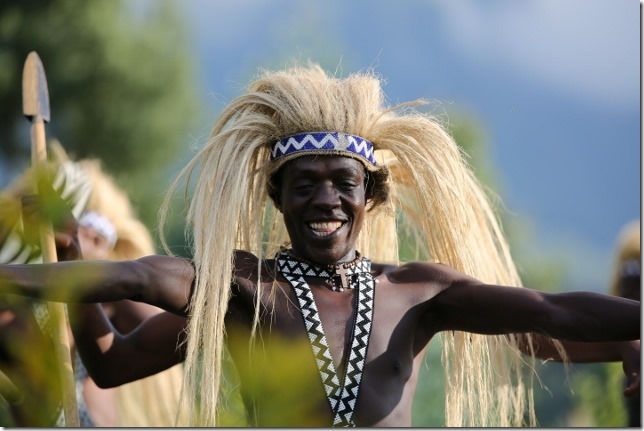 We are entertained by the local dance troup while the guides and the drivers duke it out to see who gets what group for the day. We’re not too fussed – I just want to see them. Somehow we fluke the Susa group – it’s the biggest at 37 members, it’s the most popular and famous as it’s the group the Dian Fossey worked with, and it’s also the furthest/hardest hike. I’ve been told they usually size up all the walkers and select the most fit looking for this one as sometimes it can be a 10 hr return hike to see them. Now I’m thinking we should have done a bit more running and not wussed out with all the rain. With my tiny lungs, altitude and I don’t tend to get on too well so now I’m a bit worried I’d be the slow one. 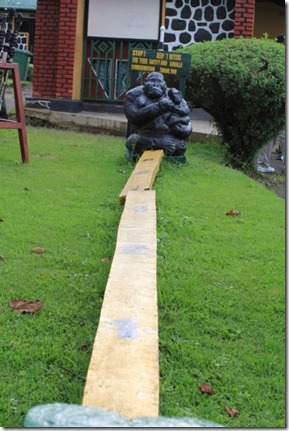 We get our briefing about our group and to stay 7 metres from the gorillas at all times and then we set off for the entrance to the susa group -  a 1 hour bumpy drive. Once we arrive we meet our armed guard and anyone who wants a porter can grab one here. We don’t really need one but we feel a bit bad an grab one to give them a job for the day and I’ve read quite often they end up carrying everyone’s bag by the end. Then we set off…basically walking through peoples back yards up the massive mountain. 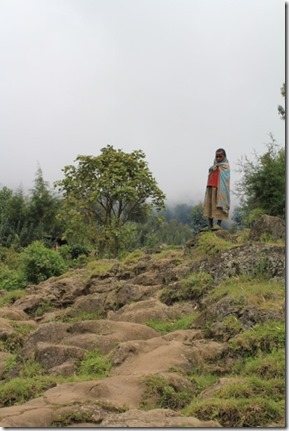 The track is quite windy and rocky. 10 mins in Kelly calls out for a break, she’s having trouble breathing. We all stop, wait a bit and then head off again. A minute later she calls out again, she wants to turn back cause she can’t breath properly. The altitude has it’s first victim. They give her bags to our porter, give her a bunch of water and bring her to the front to set the pace and encourage her to continue. If she goes back, there’s no second shot at this, you’ve lost you $750. 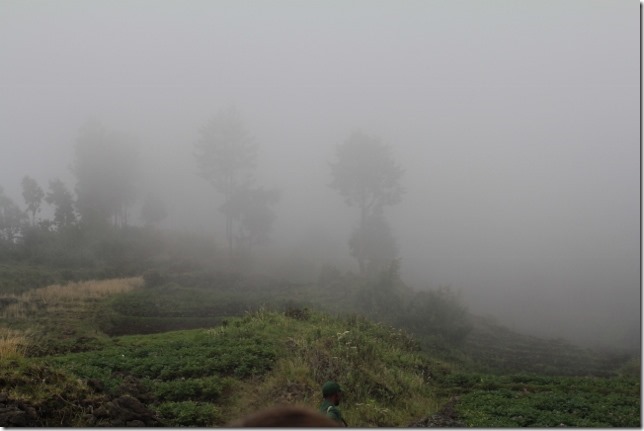 We continue up slowly, stopping often for Kellly to catch her breath. The mountains are misty and the temperature cool. She’s dizzy and starting to get a headache – definitely altitude. I give her some panadol remembering my previous experience with altitude and how bad it makes you feel. The guide makes her promise to get to the edge of the forest. We continue up, and up. We hit the edge of the forest and told that we’re 60% of the way.

We have a quick drinks/snacks break before heading into the forest – the terrain changes dramatically. It’s like going through the world in 1 walk, we’ve passed the fields and gum trees (Australia), now we’ve hit the bamboo (china) and now we’re into the forest with lantana and wild celery. Up  and up we go and then we spot the trackers and we know we’re close now. We dump our bags and walking sticks. We can hear things banging around in the bush and we follow the trackers. 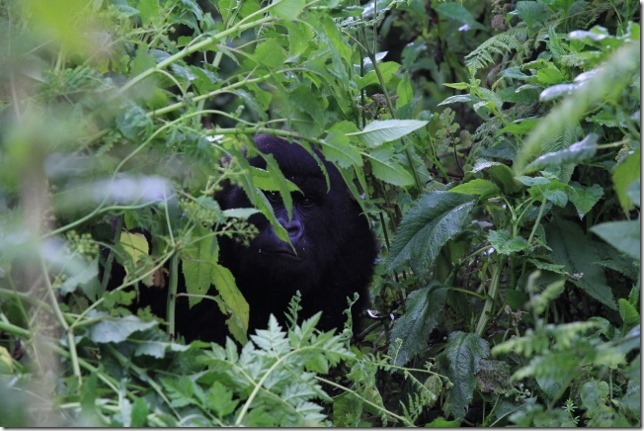 I’m half way down the group so it takes awhile but I eventually see my first wild mountain gorilla in the thick undergrowth and can hear many others around me. 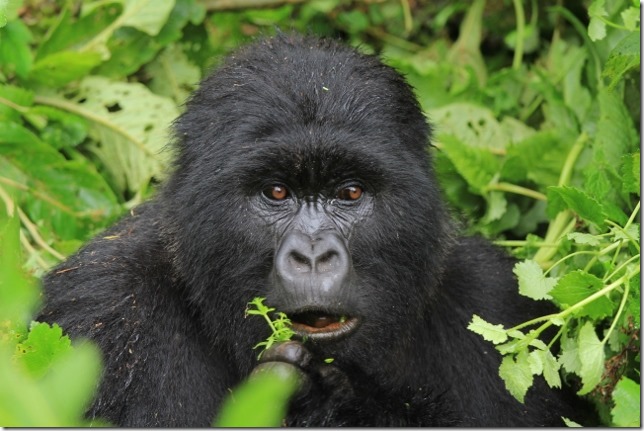 In our hour we start to see more pop out of the undergrowth. 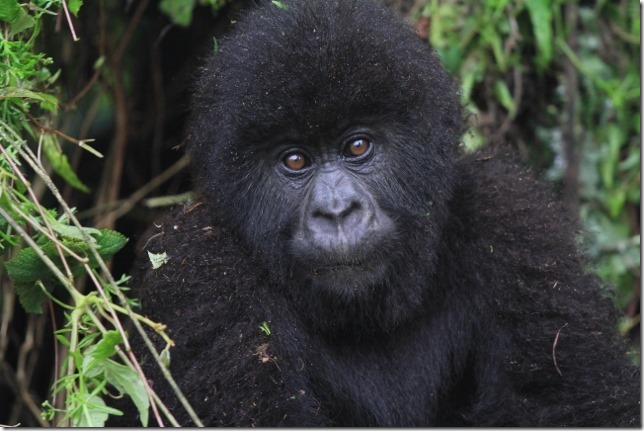 It starts to rain and many of them head for cover, except the babies that just want to show off and say hello. 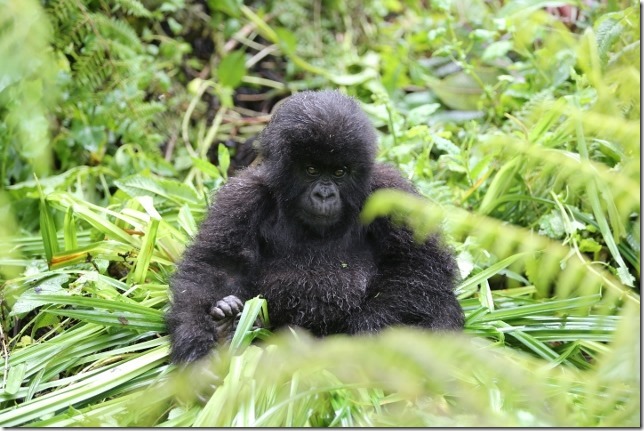 They jump up and down, roll down the hill and generally have lots of fun – they’re very adorable 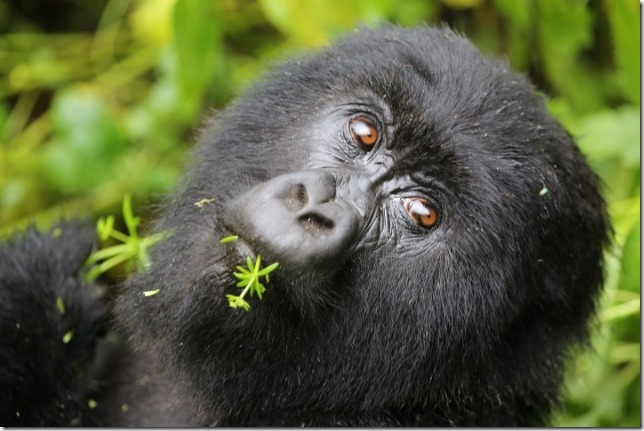 They aren’t worried about our presence at all. Jimmy trips and makes a big racket right near this one and she just looks up at him with this – what’s with all that noise – look on her face.

We finally get a look at the silverback – he is massive and quite shy. 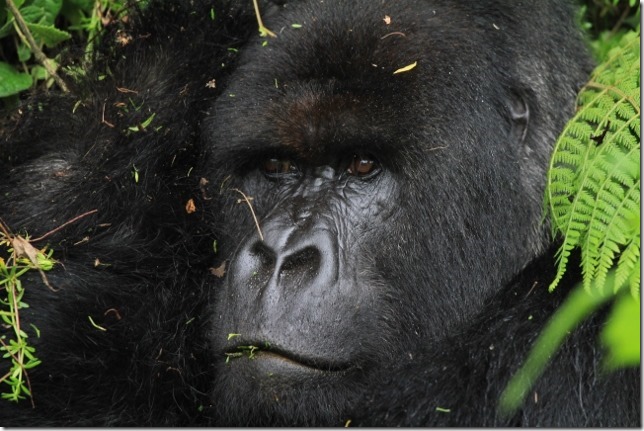 They have massive heads. 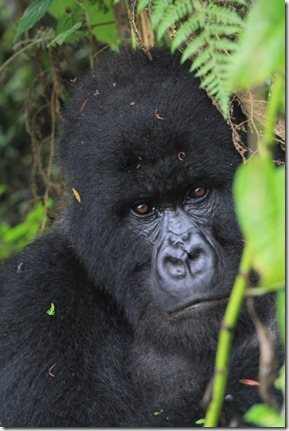 And just watch you while they eat, totally undisturbed by our presence. 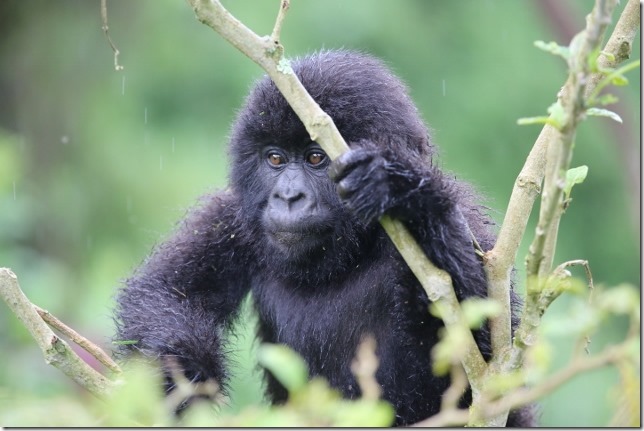 Right near the end of our hour (which goes by way too quickly), it starts to rain. We get few pictures of this little guy climbing a tree way too small for him before they all scuttle off out of the rain. Our hour is up! As we head down the mountain an antelope bashes through the forest with a racket.

A few minutes later our guide comes up and asks if anyone has a bandage – something about an antelope with a bleeding head. I’ve got bandages – but their in our bags. He radios through to the porters to bring all the bags down rather than us go back for them. While we’re waiting for our bags we realise that it’s one of the trackers – he’s been hit in the head by the antelope and has a massive gash on his head. Our bags finally arrive. We but off some big elastoplast strips and tape and try to stick it over the wound. It’s only half sticking as his head is wet and everything is moist with the rain. It seems ok but we then add the bandage over the top around his head to make sure it doesn’t come off.

We head back down the mountain. It’s not really slippery. Walking across the fields the black soil cakes under my shoes and when i stand on rocks I slip. I must have fallen 6 times on the way down.

We arrive back at the car at 3pm, pay our porters, say our goodbyes and head back to our hotel. What a day! It definitely felt too short. As the gorillas kept moving there wasn’t really any time to just sit back, watch and enjoy them. Rather it was a photo frenzy, trying to get in a spot where you can see them to get a picture.

Tomorrow is going to be big – similar morning but climbing up Mt Bisoke – which has a crater lake at the top of the dormant volcano.