This morning we say goodbye to Egypt and head to Singapore on our way home.  Last night we grabbed an old newspaper from the hotel and wrapped up the vase ready for transport home.  Took a picture of it just incase it doesn’t survive the trip. 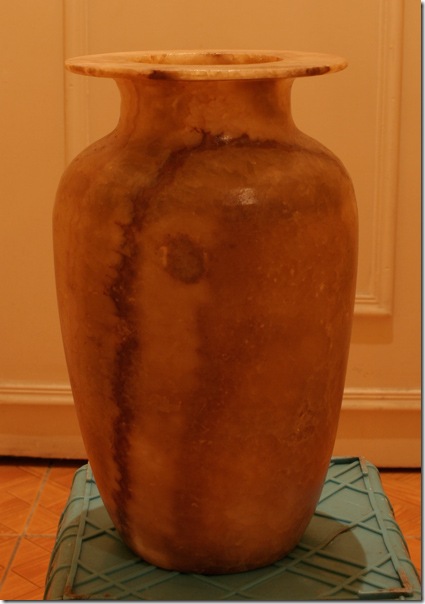 We’d organised to share a cab with Greg and Kerri from out tour group to the airport for 75LE. So with our bags strapped to the roof and everyone crammed into the tiny car we set off.  Just down the road the cab driver informed us that our ride would be 100 + 2x 10 tickets making the ride 120LE.  With no-one particularly happy with this but everyone wanting to actually get to the airport we settled for being scammed one last time.  Half way he started asking for a tip which we declined. Once at the airport he dumped Greg and Kerri in Terminal 1 carpark saying he couldn’t get any closer.  He then demanded the fare which we refused to give him till he took us to our terminal.  After taking the long backstreets and refusing all requests for money now he dumped us at a bus stop and said that’s as far as he could go.  At this point he’d only gone through 1 ticket office and we could see he could drop us here and get out without buying a second ticket.  Eventually we got out and handed over the 120LE and wandered to the bus that took us to the terminal where there were clearly taxis dropping people nearer to the terminal.  It’s unfortunate that we got such a dodgy taxi driver as our last experience of Egypt.

We checked into our flight, had some lunch and boarded our plane. Today we were flying Singapore Airlines.  To our surprise the flight went via Dubai.  After a few hours in the air we sat on the tarmac for about an hour while some people got off and others on.  The plane was full and had an old entertainment system. We arrived in Singapore 1/2 hour early and headed for our hotel – The Golden Landmark Hotel.  I booked 2 nights so we could check-in and snooze shower as soon as we arrived at 6:30am and I’m really glad we did.  It was so good to have a half decent bed and a really hot shower after so many weeks.  We’ve bought some internet access to connect with the world but unfortunately the connection here is really bad and has taken all day to get a few blog posts up.  Tomorrow we’ll wander around the place before our flight tomorrow night when we head home to Brisbane.