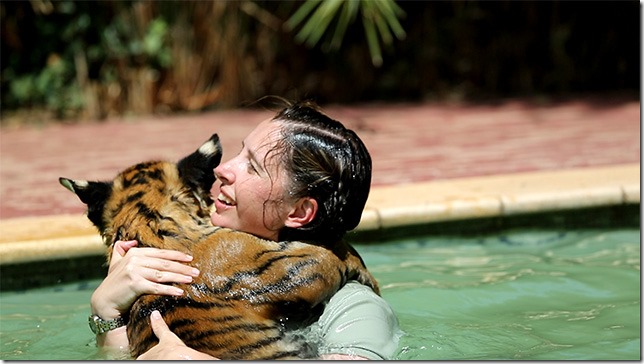 Some people swim with the dolphins, others with the sharks but how many of us get to swim with tigers? After getting up early and sorting out the Tigers today, we were all rewarded at lunchtime with a tiger swim, so today we’ll dedicate the pictures entirely to the awesome tiger swim. Unlike lions, tigers LOVE water. We divided into two groups as there are 5 very boisterous 5 month old tigers. I was a bit hesitant so went for the 2nd group as they have been quite aggressive so I wasn’t so keen to stick my face near their sharp teeth but was reassured after I saw how calm they were in the water. 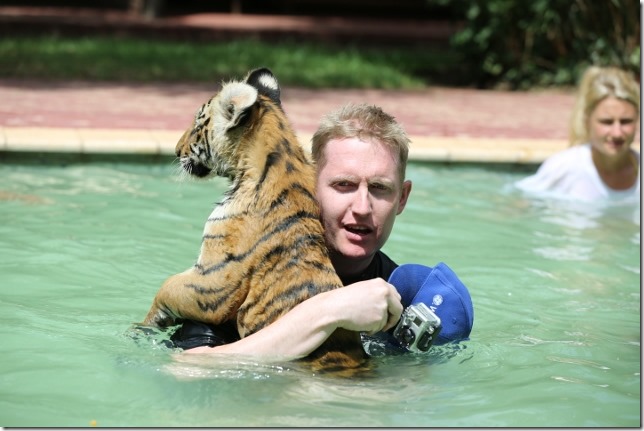 First we had to get the tigers out, and only take two of them. They struggled like crazy but as soon as they hit the water, they were so calm and happy. John went first and got Flippy (named because his ear flips back). 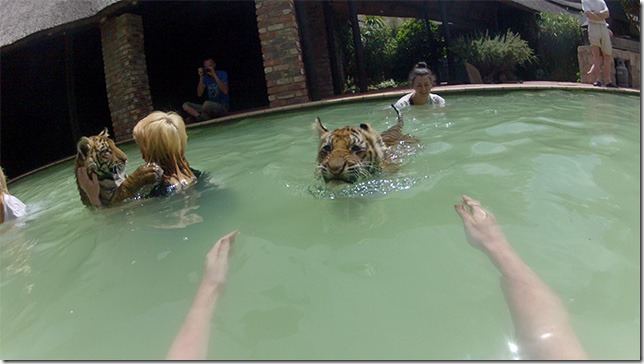 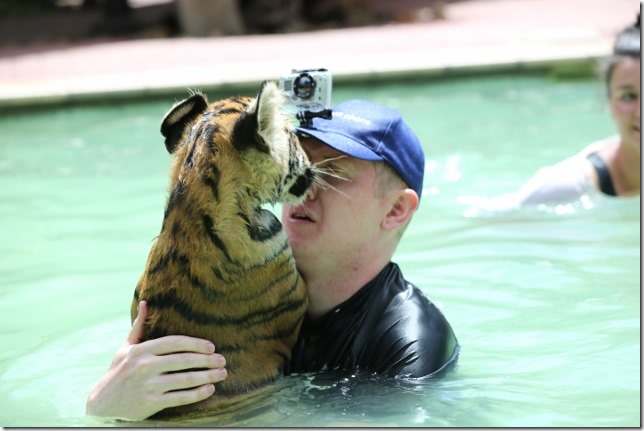 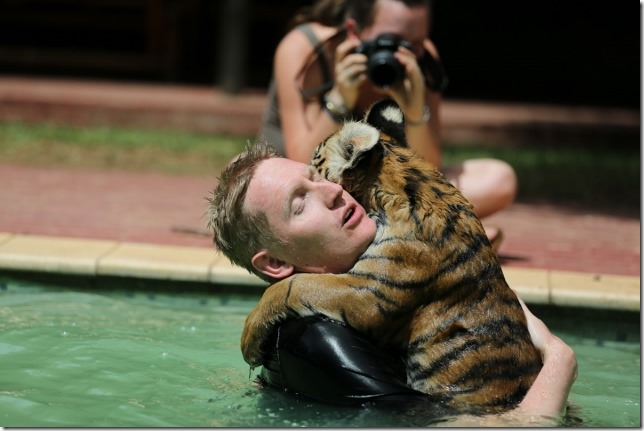 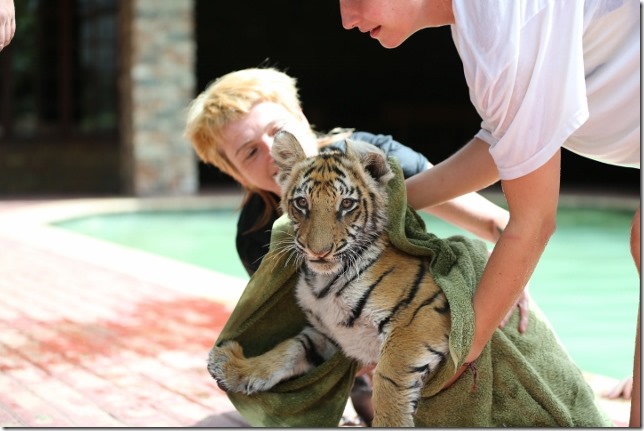 After a few laps back and forth they started to get a bit cold and started shivering so it was time to take them out and dry them off. 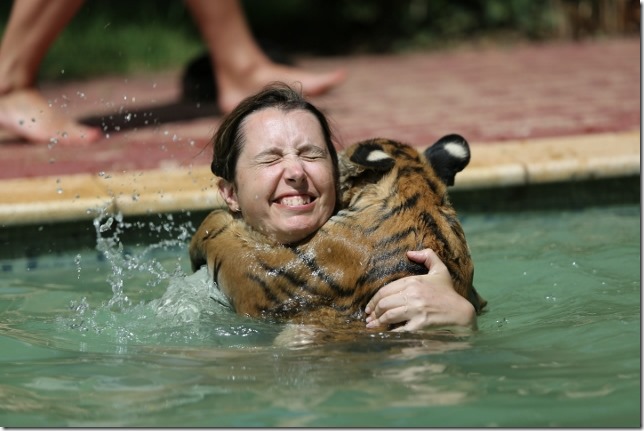 Then the fun bit, taking the first two back and getting out the three that haven’t been in the water yet. I missed all the action as I had to jump in the pool ready to “receive” my tiger. He was struggling a lot in John’s arms as he went to hand him to me and then as soon as he touched the water he calmed right down but wasn’t keen to turn around and swim at first so he had a real tight grip around my shoulders. 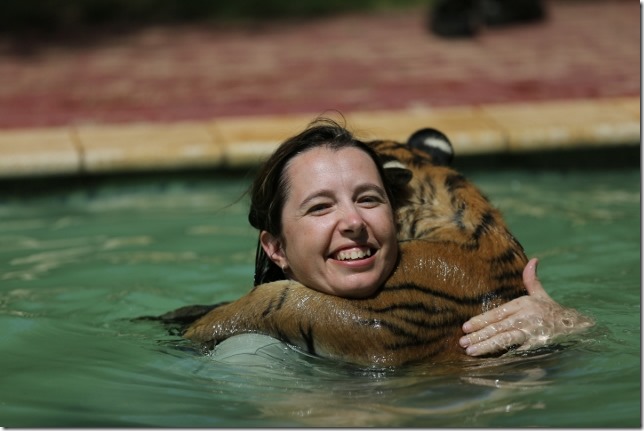 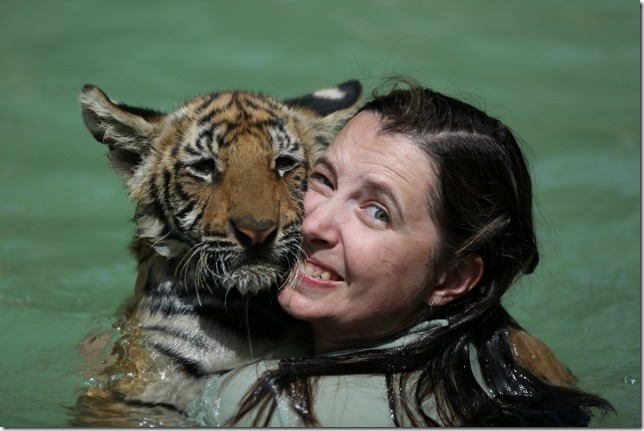 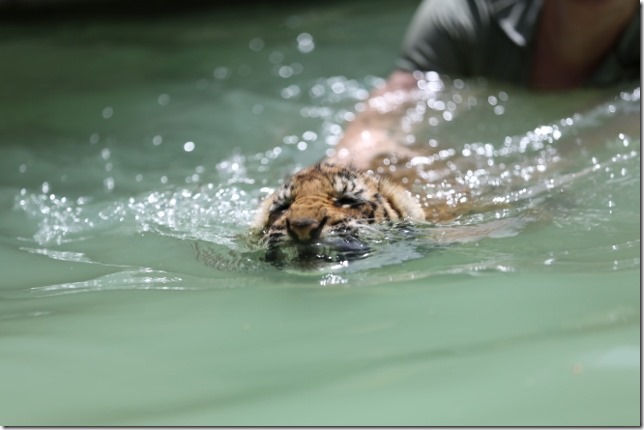 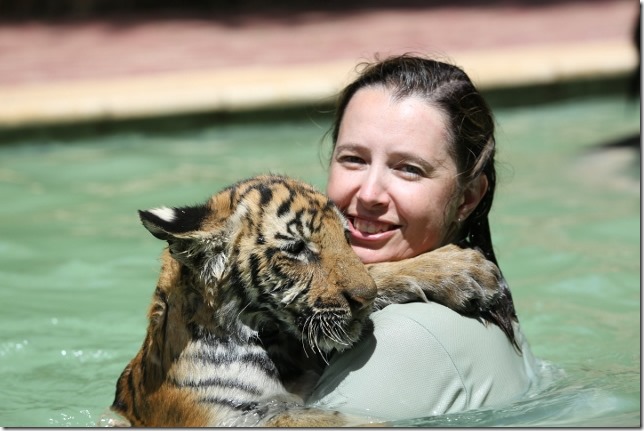 He did settle down a lot and liked swimming across and then grabbing on with his front feet around my shoulders but then would boxer feet me in the stomach for a bit. He never actually hurt me and was quite gentle and never showed his claws or tried to bite me which is pretty re-assuring when he’s so close to my face!

The afternoon we cut up a bunch of meat and then baby sat the 3 nursery babies for 3 hours. Of course they ran in all different directions and I only have 2 arms so was quite a challenge till others decided it’d be nice to join in. Just like little babies, they ran around a lot, then slept, then repeat … for 3 hours. All the sleeping almost sent me to sleep surrounded by 3 cubs sleeping at my chest/face.