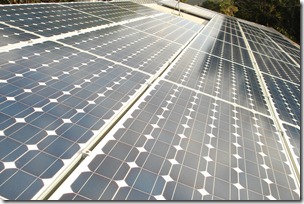 Over the weekend I reached my 1 year anniversary of having my 6 KWh solar system installed at home so I thought it’d be nice to work out how much we’ve saved. In 12 months we generated 9044 KWh which is around 24 KWh / day which I thought was pretty good considering the number of very overcast and wet days we’ve had in the last 12 months. My best output this year was a day that we generated 43 KWh but it was the most perfect, blue, non-cloudy and not too hot day I’ve ever seen so I’m not expecting that to ever happen again.

We use about 12 KWh per day so it’s great that we’re generating about twice the power we need and it means the electricity company gets to send me a cheque at the end of each quarter. The first read they did after the solar was installed they came back a second time just to double check

So that’s the money side..but how much of the environment does that save? There weren’t too many Australian calculators so I’ll give the figures from two I found:

Carbon Neutral – which allows you to enter the number of KWh and the state says that 9044 KWh is equivalent to 9.22 Tons of CO2 emissions.

Small Business Carbon Footprint Calculator – which only allows you to enter the number of KWh says 9044 KWh is 10.10 tons of emissions and equivalent to having 60.6 trees.

It’ll be interesting to see how we fair over coming years to see if panels consistently generate that kind of power.