Nicolas Boonaert’s book on Bing Maps has been released and it looks awesome! Nicolas lives in France and is an active developer in the Bing Maps community. 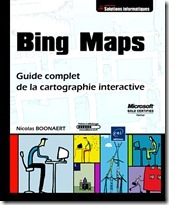 The book is in French, but amazingly I can still understand much of it 🙂 It covers quite a bit in 450 pages:

If your interested in Bing Maps or web mapping in general and can read French this is a must. If you don’t speak French but this sort of title interests you, then ping Nicolas and encourage him to do an English translation, he is on twitter here. Great work Nicolas!